Well we finally made it to Mongolia with a few ‘busts’ along the way, but we are in one piece.

Today we nearly bust completely. On our way back from Lake Hovsgol our brakes failed. Completely. No brakes. Nada. So glad there wasn’t a herd of yaks in front of us.

Ironically, we were on our way back to the town of Moron to see about getting front brake discs replaced. Lawrence was driving (thankfully) and neither of us noticed a deep dip in the road until too late. He hit the brakes hard and the dip at the same time and then… no brakes.

We limped the 47km in town straight to the garage and it got sorted in no time. A main brake line was worn and the violent application of the brakes was the last straw and, of course, we lost all the brake fluid. As it happens this was a blessing in disguise as it was a disaster waiting to happen – better there than in the Gobi desert or some such.

The next disaster was that we found out that Wednesday is ‘no alcohol day’ in this part of Mongolia. This was worse than the brakes failing! We felt we needed a beer with lunch after our terrible morning. Lawrence used his considerable charm (OK, I exaggerate) and begged the waitress to serve us a beer. She did – afraid he might cry.
Anyhoo, we’ve been in Mongolia for a week now and the weather has been fab. Border crossing was the usual shambles but no real hassle – about an hour and 45 minutes.

We spent 4 days at Lake Hovsgol camped at a Ger camp with hot showers and cold beer. The weather was brilliant - blue skies, warm sunshine and gentle breezes. We did lots of domestic chores (including removing tar from Boris courtesy of Kazakh and Russian roadworks) and lots of lazing about in the sun. Bliss.


I also spent quite a bit of time photographing yaks! They are hilarious looking creatures but have a speed and agility that belies their awkward, cumbersome looking shape. I find them quite photogenic.

The town of Moron (pron: Muroon) is terribly dull but has a great restaurant with a Korean influence. Not often you find food in this part of the world with flavour let alone some spice.

We were hoping to meet up with Bernard the biker from Belgium here but he’s had vehicle troubles as well, not sure where we’ll run into each other now.

With the brake problem fixed so quickly, we’ll leave tomorrow. Nothing to see here.

Nature's Door Ger Camp is a great place to stay. You can camp or stay in a Ger. They were happy for us to stay in our camper and just pay for camping and showers. The manager speaks english. There is a restaurant, which is OK.
N:50.5931
E:100.1817
Take the airport road before getting into Khatgal. The 'new' road is terrible so take the side tracks where possible. The new road bed has been laid but the contractors ran off with the money before finishing it.

We wild camped on the east side for one night, but everywhere is just covered in yak poo. Better to stay in a Ger camp.

In Moron, there is a great restaurant which worth seeking out. AND restaurant serves food with actual flavour and even a bit of spice - a Korean influence. It's on the same road as the well hidden tourist info (where they don't speak english and can only sell you a map and some toiletries). Look for the 50 100 hotel and head up the side street about 100 metres (off the main road). It's worth it! But no alcohol on a Wednesday.

We finally got our Mongolian visa – but only after some hard work. We left Barnaul early on Tuesday morning, realising that the Embassy in Irkutsk may close for a few days over the Naadam festival and we’d better get there Thursday morning.

And we were right. We arrived at 11.30am Thursday after 28 hours of hard, miserable driving across Siberia (and bad food) to find that the Embassy would close at 1pm on Friday for more than a week. We had to pay 70US dollars each for fast processing and then return on Friday to collect visas. No same day processing here. One hour later and we wouldn’t have made it.

We were exhausted and made our way to Lake Baikal and a quirky, rustic campsite at Listvyanka for a lazy weekend.

The concept of customer service hasn’t reached rural Siberia yet. Fat, surly waitresses, sporting bad haircuts and ill-chosen outfits glower at you if you order something unusual like tea without sugar. They all look as though they’ve just lost a favourite family pet and you were partly responsible for its demise.

I’ve been slowly learning to read Cyrillic script and have learnt all the essentials such as Bar, Café, Beer, Wine etc. The alphabet has an extravagant excess of letters and a ridiculous amount of unpronounceable vowels. So many of the words are ridiculously long and I imagine what size their Scrabble boards must be. I struggle to pronounce a town name and find it on the map only to find we’ve left that town and are approaching another, and the process starts again.

Lawrence’s Russian is coming along quite well, so mostly I just smile and nod.

We spent about a week around Lake Baikal, starting with Listvyanka. We liked our rustic campsite (got all our washing done) but the town can best be described as ‘low-rent tacky tourist resort’. Not our cup of tea, but the weather was fine.

We headed to the southern shore but the weather turned and it was cold and windy. Heading north up the eastern side of the lake, we had cold, fog, drizzle, grey. We camped in an area that is meant to be one of the most spectacular, but we couldn’t see a thing. Next day we went a bit further south and got half an hour of sunshine, then the cloud and mist came rolling back.


We gave up and are now in Ulan-Ude for showers and hair-washing before heading to Mongolia first thing.

We’ve just met an Aussie couple who have been travelling for EIGHT years on a motorbike – makes us look like wannabees.

No same-day visas for Mongolia in Irkutsk, but there is in Ulan-Ude. We had to pay 70 Us dollars for 24 hour processing (30 US dollars for 3 day processing). You need to go the bank to pay the fee but they don’t take US dollars. Use the exchange rate of the day in roubles.

The road from Barnaul to Irkutsk is variable but a lot is terrible. However the road is being rebuilt, so in about 2 years time, it’ll be grand.
Posted by Kate at 3:49 PM No comments:

From Russia With Love

Our last few days in Uzbekistan saw us driving through the Fergana Valley with a stopover at a hotel with a swimming pool. After the relentless heat on the Silk Road it was a welcome relief.

Police check points are common in this country and we got stopped quite often, but the last 100kms saw us being stopped 4 times – what a pain. They simply take down your details and write them painstakingly in a ledger. Smacks of paranoia.

The border crossing into Kyrgyzstan was painless and we were soon in the border town of Osh and met up with Bernard the Biker from Belgium – again. We’ve become quite chummy. He was waiting for a part for the motorbike to arrive from Switzerland. We also met Sam, an Aussie riding his bicycle from Vladivostok to London – as you do!

Osh has a great bazaar and we stocked up of meat and veg. We were soon climbing into the Tian Shan Mountains that lead into China. The road up to (Lake) Song Kol was ‘one of those roads’. Stunningly beautiful, difficult and long. We stopped near a Yurt camp by the lake at 3100 metres with cold drizzle. We went from 40 degrees to 4 degrees – is there no ‘normal’ weather to be had?
Next day we did our highest pass at 3,450 metres – spectacular drive. Terrible road. 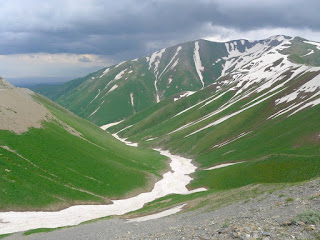 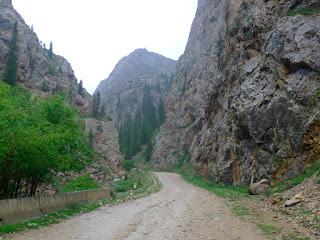 We then headed to (Lake) Issyk Kol and stayed at a Yurt Camp hotel in Boris. We just used their facilities for a small fee – a fab spot by the vast lake. We met up with a Brazilian couple in a Land Rover and a French family in a motorhome, all doing similar adventures. We love meeting up with other travellers and swapping stories. 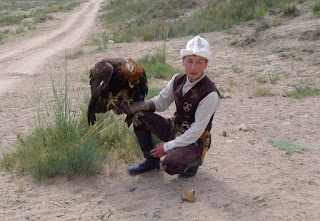 The mountains in Kyrgyzstan are really awesome, but you wouldn’t go out of your way to see any of the towns. All quite dusty and drab. We avoided the capital, Bishkek.

We pushed on to get back into Kazakhstan and the city of Almaty where we intended to obtain our Mongolian visas. Best laid plans… you can imagine what happened!

We arrived first thing Wednesday morning with all our paperwork in order to be told that the Consulate in Almaty no longer issues visas and that we needed to go to Astana, as though it was an hour away. It’s a 3 day drive.

What to do? We opted for flying up and back in day, having been assured the visa would be issued on the spot. Best laid plans…

Our 6am flight got us to the Embassy at opening time and we handed over our application and were told to come back tomorrow. What??? No, no, no. Finally they said ‘come back at 12’. Sounds easy? The embassy in is the burbs so getting cabs back and forth isn’t as simple as it sounds, until you know the system. Basically you stand on the road and ‘hitch’. Someone will stop and you negotiate a price.

Anyway, long story short, as they were about to close for lunch at 1pm, we realised that no visa was going to be issued. The Consul was nowhere to be found and wasn’t answering his phone. Obviously off with his mistress. We took back our passports and flew back Almaty, visa-less and about 600 euros poorer.

So, after 3 days of hard driving and 1600km on awful, boring Kazakh roads, we are now in Barnaul in Russia. We’ll head to Irkutsk and maybe get a visa there, if they’ll be so kind.

The border crossing from Kyrgyzstan into Kazakhstan was a breeze. It's open from 8am to 6pm (summer only). At this border they will automatically register you. Look for TWO green stamps on your arrival/departure document. If you have these, there is no need to register when you get to your first town. Avoids a hassle.

In Osh we stayed at the Eco House. Great location, good rooms, safe parking, terrible breakfast but we were used to that. Lomonosova Street, 25, 723500 Osh.

At Song Kol you can camp anywhere. We stopped near one of the Yurt Camps, but anywhere is fine.

At Issyk Kol we camped at Bel Tam Yurt Camp. This is a brilliant spot and you can camp there for 200 SOM a night including showers. The camp is clean, rustic and well maintained and you can have a meal if you wish. Abut 10km east of Bokonbayevo. Nearest town is Tong.

Past Semey, at 97km before the Russian border we found a great spot in a pine forest. Cool and peaceful. Here are the co-ordinates for the side road to take. Drive down about 500m and you get a sort of junction, turn left and you’ll find a flat clearing.
N 50.5777
E 80.327

There was also a potential spot 68km before the Russian border.

The border crossing was easy - no hassle and only took 1/12 hours.