After leaving our luxury hotel in Pyatigorsk we headed east to Elista. This town has an odd feel to it, mostly Buddhist with a mainly Mongol population. The Mongols have been in and out (forcibly) of this town over the centuries but are firmly ensconced now. Tibetan style temples seem very out of place in Russia.

Next town, Astrakhan at the top of the Volga Delta. With it’s amazing Kremlin as the centre-piece, the city is worth exploring and has a relaxed, thriving feel to it. We liked it and the weather was warm. We took a trip out to the Delta where the Volga explodes into thousands of streams and waterways providing a wetland haven for bird life. We saw loads of white-tailed sea eagles and greater spotted eagles up really close and of course loads of water birds.

We found a favourite ‘pub’ for lunch each day with good salads – quite a treat. Eating in this part of the world – Georgia, Russia, Armenia etc is unlike ordering and eating at home (or UK, Europe etc). Often all your food arrives at the same time. We usually order 2 bowls of soup and a salad and main course to share. Salad will arrive first. Then after you’ve had 3 mouthfulls of soup, your shashlik will be plonked down. Or I’ll get my meal and Lawrence’s will arrive half an hour later. I’ve seen people get their cheesecake along with their salad before their ‘entrée’!

Leaving Russia, we crossed the border into Kazakhstan. The road was dire, we couldn’t believe how bad it was. We camped the night in the desert and were greeted by a sandstorm. Oh the grit!! It was in our wine, in our food, our ears, our hair, EVERYWHERE. I’m still cleaning it out of Boris. Fine grey grit. 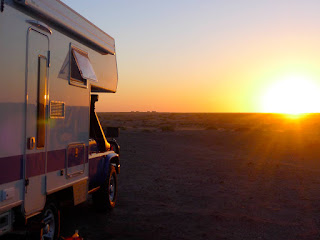 Next day we finished the dreadful road and arrived in Atyrau where we got internet sorted and met Bernard from Belgium. We also needed to register (details below), a bit of a saga but OK. Why you need to register when we have a valid visa and passport stamp I don’t know. A hangover from Soviet days I expect.
Heading south (on good road) we camped in the desert again with views across to a beautiful cemetery with a mausoleum. These lovely cemeteries are always situated in the middle of nowhere. And there’s nowhere like ‘the middle of nowhere’ in Kazakhstan. Jeez it’s bleak. Flat, hot and dry.
The road improved though, much to our joy. Our third night of desert camping saw us near our destination of the Uzbek border. We’d heard how difficult this border crossing can be so wanted to get there early.

We got our calculations a bit wrong and didn’t arrive until 7.30am, and it was already getting hot. Luckily we didn’t get ‘the full treatment’ ie; unpacking everything for a search. As tourist you get priority treatment in the passport and customs lines so the whole thing only took 3 ½  hours. Not too bad. We’ve heard horror stories of 7 hours or more.

The road on the Uzbek side was just as bad as the Kazak side. The Kazaks seem to specialise in bad border roads. So we had 160km of really, really bad roads. We took to the side sand tracks quite often.

It’s so hot that we prefer to keep driving when there’s nothing to see. Boris’s aircon keeps us cool. We stopped at truckie café for a meal and shower about 6pm and met Bernard from Belgium again!.

We carried on towards Khiva until 8pm when things start to cool down and camped somewhere or other – not really sure where!

So now we are in a hostel in Khiva. It’s really too hot here to stay in Boris and far too hot to cook. I know I wanted hot weather, so ain’t complainin’ but 40 degrees is hard to take when you aren’t acclimatised. Khiva looks amazing and we’ll explore it at 6am tomorrow.

This is the start of the exotic Silk Road – watch this space.

It’s hard to camp in Pyatigorsk, Elista and Astrakhan.

We stayed in a great hotel in Astrakhan. Good location, friendly helpful owners and nice big room. Also good ensuite bathroooms. There’s a kitchen to make a cuppa etc. Breakfast is included. Great value. If you go there tell Anton that Slowcamper recommended them.
Name: Hotel Astra (no nameplate out the front but look for Pegas Travel and FL Language school – it’s all the same building)
Address: Naberezhnaya 1 Maya, 55
Easy street parking right outside with security camera.

The border crossing is fairly easy but confusing. When you arrive on Russian side you get a chit of paper, stating how many people you are. Don’t lose it! Do your passport and vehicle importation stuff.

Drive on to the border proper (bridge over the river) and at the guard house they’ll ask for your chit (and you’d better have it).

Drive over the bridge to the next guard house and make sure they give you the next chit (they didn’t give us one and we had to drive back etc).
Now you’re in Kazakhstan. When arrive at the building, park, go inside to do passport control, then they’ll check the vehicle and as you leave someone will ask you for the chit.

The first 50 kms of road is terrible. Really bad. Seriously. Bad. All the way to Atyrau is awful but the first bit is the worst. It’s really good road from Atyrau to Beyneu.

If you need to register in Atyrau (non-EU passports) here are the co-ordinates or the office.
N 43°15’01.9
E 76°55’30.9
It’s up a side road and there’s nowhere to park. Make sure you have 2 photocopies of the driver’s passport, visa, departure card, and the vehicle registration (car passport). Of course they don’t have a photocopier at the office.

From Beyneu to the Uzbek border is another of those roads. It’s 92km of hell. Really, really bad. Possibly the worst yet. The other side is bad for about 50km, then slowly improves.

The border crossing is tedious but we didn’t have any hassle. You can speed it up a bit by having two photocopies of driver’s passport and vehicle registration.

We wild camped all through Kazakhstan in the desert. No hassle, just hot and dusty.