Of all the Gin Joints in all the Towns…

... in all the world, we had to go to Casablanca. We had 2 very good reasons to go there despite all the warnings.

Firstly, how can you resist the 2nd largest mosque in the world, with the world’s tallest Minaret, that we infidels can actually enter? Secondly there’s THAT movie which, disappointingly, was filmed entirely in Hollywood.

Anyway, how can you come to Morocco for 6 weeks and not see it, especially as we were more or less driving right past? So, yes, everybody was absolutely correct in that it is a dump, but most towns we’ve seen could be classified as dumps, except maybe Tangier, which seems to have dragged itself out of the garbage, mostly.

The Hassan II Mosque however, makes Casablanca worth the visit. Built on reclaimed land, it comprises 20,000 square metres internally, and is astoundingly beautiful. I couldn’t imagine that a building so large could be so lovely. The Minaret, at 200 metres can be seen from most of the city. Finished in 1993, it only took 6 years to complete, employing 10,000 skilled artisans working around the clock, using traditional methods. The result is magical. 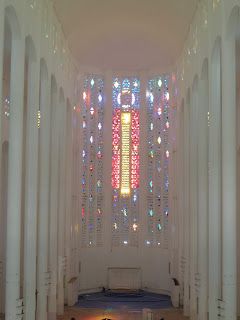 The other truly beautiful building is the colonial French Cathedral.  Built in a ‘neo-moorish’ art deco style, you’d think the blend of seemingly incongruent architectural styles would be hideous, however it is quite enchanting. Sadly it is in a state of decline. We climbed the tower, which has become a pigeonnier, the steps coated thickly in pigeon poo. It’s a crime that the Catholic Church allows these amazing buildings to get to this state.

The Medina in Casablanca was awful - dirty, unpaved, smelly and uninviting, as was the rest of the city that we saw. I think they were laying a new tram track throughout the city centre, but hard to tell, as it looked more like they were tearing it up.

2 days ago we spent the day in Rabat, the capital of Morocco. Expecting the worst, we were pleasantly surprised. We were greeted at the station by gangs of football fans, but there was no aggro and no hooliganism, rather they were singing! Singing in tune! - with lovely voices and big smiles, just out to have a great time.

Although basically a charmless city, Rabat did have a lovely, small, clean Kasbah with wonderful pastries!! Further highlights were the massive & unfinished mosque, and the wonderful ‘Chellah Ruins”.  The Chellah was built in the 8th century, abandoned in the 12thth century and taken over by storks in the 21st.

We are camped north up the coast from Casablanca, and will head south towards El Jadida tomorrow. Apparently things get a little nicer and cleaner around there. So far we have not been really taken with Morocco in general, apart from a few lovely exceptions.